To discuss code, it is best to use the forum.

For things not suitable for the forum, e-mail us at manopttoolbox@gmail.com.

We are happy to receive feedback and bug reports or requests for more features, to discuss the toolbox in general as well as its documentation and to help you use it.

We would also love to know how you use the toolbox, and if you built nice manifold factories, solvers or tools that could benefit others.

The Matlab version of Manopt is developed by Nicolas Boumal and Bamdev Mishra. The toolbox originated within the RANSO group, led by Pierre-Antoine Absil, Yurii Nesterov and Rodolphe Sepulchre in 2012. The purpose of Manopt is to facilitate experimentation with optimization on manifolds, as well as sharing geometries and algorithms. This blog post gives a quick tour. See also PyManopt.org and Manoptjl.org for information about the Python and Julia projects.

The two following books can be helpful to learn the relevant mathematics (both are available online for free):

The toolbox is stable and can be used right away. Being research software, it is also perpetually work in progress. We welcome contributions, bug reports and feedback. Let us know what you think!

If you use the Matlab toolbox, please cite the Manopt paper published in the Journal of Machine Learning Research (notice the 'o' in Manopt is lowercase):

Researchers develop new solvers and geometries all the time. It is important for them that their work be credited properly. Please cite the relevant papers for the solvers and geometries you are using, as they may have been contributed by different authors. See the comments at the beginning of the m-files for instructions. Thank you.

The RANSO group organized a one-day workshop on Riemannian and nonsmooth optimization in Louvain-la-Neuve on Sept. 25, 2015. Most people involved with Manopt at the time were present for this delightful day. See picture below. 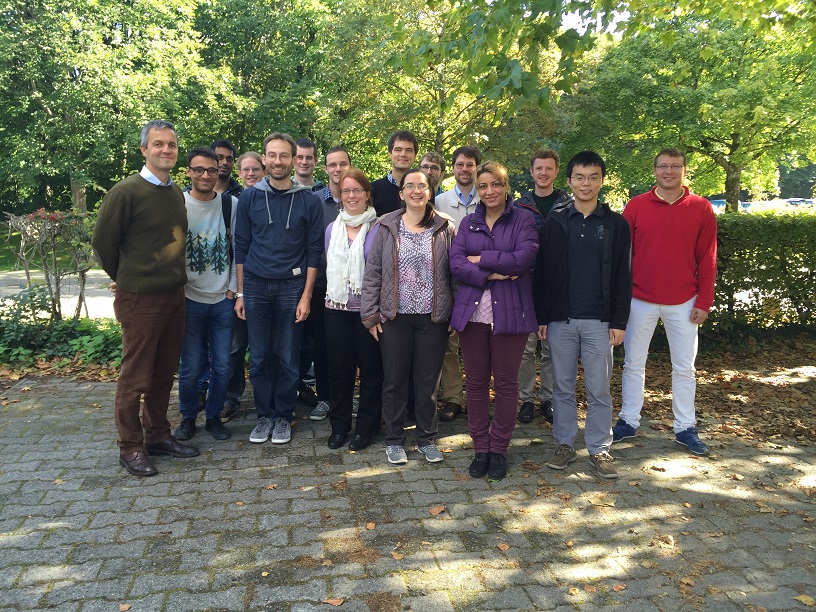 The original design, code and documentation of the toolbox is due to Nicolas Boumal. The design of the toolbox was imagined with Pierre Borckmans, who also contributed the PSO solver. The main developers are Nicolas and Bamdev Mishra. The RANSO group (Pierre-Antoine Absil, Yurii Nesterov and Rodolphe Sepulchre) provided helpful support and guidance at the onset.

The GenRTR code by Chris Baker, Pierre-Antoine Absil and Kyle Gallivan was modified to become the trustregions solver. The latter is arguably the most important solver in the toolbox so far, hence Chris and his colleagues merit special credit. We thank them for releasing their excellent software under an open source license, which allowed us to build upon it.

Bart Vandereycken helped a lot in revising the geometry file fixedrankembeddedfactory, as per his paper, Low-Rank Matrix Completion by Riemannian Optimization. Eitan Levin added some numerical tweaks to the retraction that make it more robust close to "the brink" (matrices of lower rank), though also a bit slower to compute.

Hiroyuki Kasai, together with Bamdev, contributed fixedrankfactory_tucker_preconditioned, a geometry for tensors in Tucker format with fixed multilinear rank. This and the accompanying example is based on their paper, Riemannian preconditioning for tensor completion. Both, together with Hiroyuki Sato, also contributed the stochasticgradient solver.

Jesus Briales contributed a few improvements to the code via pull requests on GitHub.

Michael Psenka contributed the code for optimization over tensors with fixed tensor-train rank, accessible through fixedTTrankfactory, together with an example script. This geometry heavily relies on TTeMPS for all core functionalities except second-order optimization (specifically, M.ehess2rhess). TTeMPS is code distributed by Michael Steinlechner, Daniel Kressner and Bart Vandereycken. We thank them for releasing their excellent software under an open source license, which allowed us to build upon it. It is packaged in Manopt with small modifications.

Xiaowen Jiang worked in the group of Nicolas to add support for automatic differentiation during the summer of 2021, based on Matlab's Deep Learning Toolbox. This aligns well with Manopt's overarching goal, which is to lower the entrance barrier for people who would like to give Riemannian optimization a try -- thanks a lot, Xiaowen!

Victor Liao worked on Manopt in the group of Nicolas during the summer of 2022 and contributed: a long-awaited refactoring of the trustregions solver to allow for various subproblem solvers, a rewrite of the truncated CG (tCG) subproblem solver to improve performance by recycling computations after a step rejection, a new global subproblem solver based on code by Yuji Nakatsukasa, a constant step-size line-search helper for gradient methods, and various improvements (e.g., to tangentorthobasis).

Here is a list of open-source code that proved useful to develop the toolbox:

Things users do with Manopt

We see a growing number of papers in various disciplines where researchers use Manopt. A list is available on Google Scholar with over 800 citations. We single out a few projects we think illustrate some of the flexibility of the toolbox (this is a very old list...):

We'd love to hear about your papers! Please fill in this quick form to add yours to the list. The list appears here.

Manopt is meant to ease the sharing of geometries and solvers. If you developed a Riemannian geometry or a solver for optimization on manifolds and would like it to be featured in Manopt, please contact us.

We will ask for an implementation of your manifold / solver in the Manopt format and an example script to illustrate its features. The documentation page as well as the code will, of course, visibly reflect the authors of the contribution. The documentation will feature links to their personal pages and relevant publications. We will gladly help.

In short, this means that everyone is free to use Manopt, to modify it and to redistribute it on a free basis. Manopt is not in the public domain; it is copyrighted and there are restrictions on its distribution (see the license and the related frequently asked questions). For example, you cannot integrate this version of Manopt (in full or in parts) in any closed-source software you plan to distribute (commercially or not). Please contact us for more information.

The documentation of Manopt (this website) is copyright by Nicolas Boumal, all rights reserved.

A number of tools have proven invaluable for putting together this website and, most importantly, the documentation: